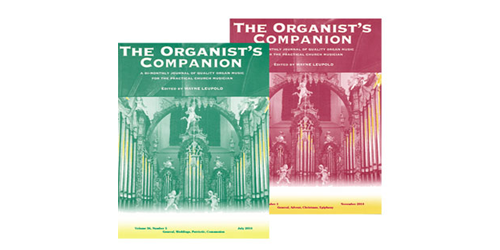 The Organist’s Companion is a bimonthly, 32-page journal of quality organ music, chosen from all the major historical periods, nationalities, and styles of organ music. Approximately one-third of each issue is music from the seventeenth and eighteenth centuries (Baroque Era) and one-third from the nineteenth and early twentieth centuries (Romantic Era). The final third consists of pieces composed specifically for this journal. Some compositions are for manuals alone; others are for manuals and easy pedal, on two or three staves. The music in each issue is chosen to be appropriate for the season of the year of that particular issue. Many compositions are based on seasonal hymn tunes.

The Organist’s Companion originated in December 1978. Don McAfee from McAfee Music in New York City phoned Wayne Leupold and asked if he would like to edit a thirty-two- page, bi-monthly magazine of easy, quality organ music for amateur and semi-professional organists. Wayne had worked with McAfee as a freelance editor of organ music since 1975. His first volume of edited organ music, The Organ Works of John Knowles Paine, was published in 1976 by McAfee Music in celebration of the US bicentennial. Subsequently, Leupold edited, and McAfee published many editions of American and nineteenth-century organ music (e.g., The Organ Works of Arthur Foote, The Mendelssohn School, Robert Schumann: The Complete Works for Organ and Pedal Piano, etc.). Wayne accepted Don McAfee‘s invitation and ultimately published the first issue of The Organist‘s Companion in December 1978.

In 1980 McAfee sold his publishing company, McAfee Music, including The Organist‘s Companion, to Belwin-Mills, then the world‘s largest publisher of classical organ music. During the 1980s and 1990s, US businesses experienced many mergers and takeovers. The trend also impacted music publishers. Belwin-Mills was bought first by Coca-Cola, then Boston Venture, Columbia Pictures Publications, Warner Brothers Publications, and finally, in 2005, by Alfred Music Publications. With each transaction, The Organist‘s Companion with Wayne Leupold as the editor moved to the new owner. (Leupold, on the other hand, seemed like a leaf floating down a stream having little control of what was happening to him or where he was going!) Before Alfred Music took over Warner Brothers Publications, they had expressed their intention to discontinue the magazine. Warner Brother Publications instead gave the magazine and all the stock of the back issues in their warehouse to Wayne Leupold, who by then had founded Wayne Leupold Editions, Inc. A transfer occurred July 1, 2005, along with the July 2005 issue of The Organist‘s Companion. Wayne Leupold Editions, Inc., now known as Leupold Editions, a division of The Leupold Foundation, has been the publisher since January 1, 2020. Throughout its forty-five-year history, Wayne Leupold has been the supervising editor of The Organist‘s Companion, dedicated to providing a consistently high-quality organ music magazine.

The Organist’s Companion is now in digital format (starting with the November 2016 issue). If you subscribe to the printed issue, the digital format is included at no additional cost. However, a digital subscription may be purchased separately at a lower rate.

Wayne Leupold holds a B.M. and a B.A. “with distinction” from Valparaiso University, Valparaiso, Indiana, an M.M. in organ performance from Syracuse University, Syracuse, New York, and the Distinguished Alumnus Award from the Valparaiso University Alumni Association. He has edited over 400 volumes of organ music. In 1989 he formed the music publishing company, Wayne Leupold Editions, Inc., with the purpose of publishing organ teaching materials and organ music from all national schools and historical periods. In 2008 he founded The Leupold Foundation whose mission is the preservation, reproduction, and dissemination of the culture of the pipe organ. The preservation is accomplished through The Leupold Archives, a repository of past and present organ music and related items for use in the future.

One Tiny Light in the Darkness and Chill

The Harvest Now Is Over

“God Has Given Gifts to All”