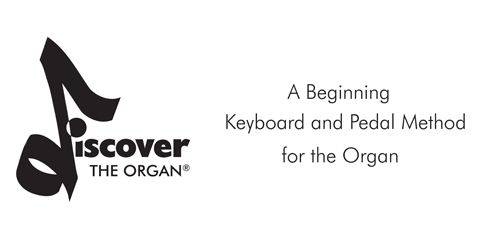 Discover the Organ® is a four-volume series of introductory keyboard study for any keyboard instrument (Basic Organ Repertoire, Modern Keyboard Technique, Christmas Season at the Organ, Easter and Pentecost Seasons at the Organ, and Organ and One Instrument). The first two, Basic Organ Repertoire and Modern Keyboard Technique, are considered basic series while the remaining three are supplemental. The levels one through four of the Discover the Organ® method roughly parallel the technical-difficulty levels of the Bastian Piano Literature Series, volumes 1 – 4.

The Basic Organ Repertoire series, levels 1, 2, and 3, co-edited by Wayne Leupold and Naomi Rowley, contains both free compositions and pieces based on well-known hymn tunes and spirituals. Many different cultures are represented including Early American, African American, Native American, Hispanic, Jewish, and Asian, as well as many European countries. Over one hundred composers are represented in this series. Among the living composers represented are Michael Burkhardt, David Cherwien, Emma Lou Diemer, Alfred V. Fedak, Wilbur Held, Dan Locklair, Austin Lovelace, Robert J. Powell, and Larry Visser. The compositions were particularly written to appeal to young students. Students who like to play loud pieces will be delighted with Janet Correll’s Fanfare (illustration 7), Procession of Praise, and Triumphal March found in the level one volume. They also will be fascinated with the many echo pieces, which require manual changes, such as Janet Correll’s Carol of the Birds, Alfred V. Fedak’s Echo Dialogue and Antiphonal Hosanna, Larry Visser’s Echo (illustration 8), and Randolph Curries’ “Little Jesus, Sweetly Sleep,” all also found in the level one volume. Levels 2, 3A, and 3B also contain similar types of compositions. Children who like to play fast with a loud registration will find many toccatas in this series beginning in level two (i.e. Toccatina by David Schack, level 2 (illustration 9); Toccata by Emma Lou Diemer, level 3A (illustration 10); and Toccatina on “Here, O Lord, Your Servants Gather” by Larry Visser, level 3B (illustration 11). A unique feature of this repertoire series is the appearance in each level of an original sonatina for organ by Larry Visser (level 1 – Sonatina on Spiritual Themes: I “Somebody’s Knocking at Your Door” II “Steal Away to Jesus” III “Standing in the Need of Prayer”; level 2 – Sonatina on Themes of Creation: I “This Is My Father’s World”, II “Morning Has Broken”, III “All Things Bright and Beautiful”; level 3B – A Sonatina for Holy Week: I “He Is King of Kings: He Is Lord of Lords”, II “Were You There?”, III – “He Arose”). These compositions give the organ student exposure to many of the classical forms traditionally associated with the sonatina and sonata (i.e., sonata allegro form (illustration 12), ABA song form (illustration 13), rondo form (illustration 14), and ritornello form (illustration 15). Practice suggestions appear where needed throughout these volumes, with an introduction to the organ at the beginning and a glossary at the end of each volume. This series contains compositions in a variety of keys, textures, and styles, and is intended to expose the student to a very broad spectrum of music.

The Christmas Season at the Organ series, arranged by Alfred V. Fedak, contains carols, hymn tunes, and other seasonal melodies associated with Advent, Christmas, and Epiphany (illustration 17). Each volume also includes a preface explaining these seasons.

The Organ and One Instrument series, arranged by Allan Mahnke, provides an ensemble experience for the young organ student. Many of the compositions are based on well-known hymn tunes. The instrumental parts, in both the C and B-flat versions, are of a comparable or easier level for the instrumentalist (illustration 22).

All the compositions in the entire Discover the Organ® method are carefully edited and fingered. The inside back cover of each volume contains a registration information page that presents an explanation of the different pitches of organ pipes and lists of the names most commonly used for the four families of organ tone. Practice suggestions, in addition to appearing throughout the beginning series (Discover the Basics®) and the Basic Organ Repertoire® series, also are in all the other series. Although primarily included to help students develop effective learning habits, practice suggestions also have been provided to assist any teachers who have had little or no previous teaching experience. While the Discover the Organ® method focuses primarily on developing manual skills, elementary pedal concepts are introduced. The Discover the Organ® method also may be used as an introductory organ method for students who have or are presently acquiring keyboard skills through piano study. A piano student may begin simultaneous study with this organ method at any time or switch over to this method from piano study at any level.

By the time the student is in the level three materials, his/her manual facility should be sufficiently developed so that simultaneous study in a traditional organ method, such as the First Organ Book, may begin. This assumes that by this time the student also has long enough legs to do traditional legato, toe-heel pedaling. For the continued development of manual technique, the student should continue in the various series through levels four and five of the Discover the Organ® keyboard method, particularly the Basic Organ Repertoire series and the Modern Keyboard Technique series. Such a constant and thorough approach will ensure the development of a masterful keyboard technique at the organ.

Many young people find the organ fascinating with all its keyboards, pedals, buttons, stop knobs, and multiple sounds. Children can become interested in the organ through exposure in their church services, demonstrations by the church organist, and different types of events presented by AGO chapters or other groups of interested individuals. When such interest is awakened, there should be an immediate follow-up. Immediately get them on organ benches, studying and playing the organ at whatever keyboard level they are. If they have no keyboard experience, start them on the organ from the very beginning, for now there is a keyboard method available that can develop a child’s keyboard ability on the organ from the very beginning of his/her study of music. (Other instruments also could be studied simultaneously, if desired).

For the organ to remain the principal instrument in the church, we must train more organists. To accomplish this we must first expose the organ to more young people, and second, begin to teach the organ to children at much earlier ages than previously has been done. There is no reason why young children cannot begin both their musical education and the development of their keyboard skills at the organ. Let’s have more children Discover the Organ®!

This is a revised and enlarged version of this article that first appeared in The American Organist (September, 2000).

Wayne Leupold holds a B.M. and a B.A. “with distinction” from Valparaiso University, Valparaiso, Indiana, an M.M. in organ performance from Syracuse University, Syracuse, New York, and the Distinguished Alumnus Award from the Valparaiso University Alumni Association. He has edited over 400 volumes of organ music. In 1989 he formed the music publishing company, Wayne Leupold Editions, Inc., with the purpose of publishing organ teaching materials and organ music from all national schools and historical periods. In 2008 he founded The Leupold Foundation whose mission is the preservation, reproduction, and dissemination of the culture of the pipe organ. The preservation is accomplished through The Leupold Archives, a repository of past and present organ music and related items for use in the future.