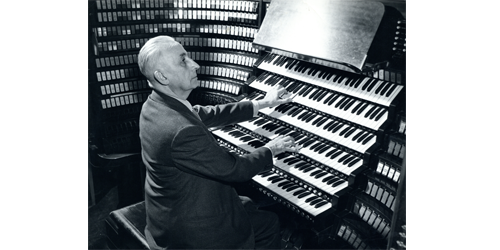 There is little need here to reconsider Marcel Dupré’s stupendous achievements during his long and storied career. His unparalleled feats of virtuosity, improvisation, and composition are recounted elsewhere in detail. It is, however, appropriate at this juncture to attempt to situate Marcel Dupré in the organ culture of his day. Understanding the context of his career goes far in elucidating heresay and all-out misinformation still actively perpetuated 50 years after his passing in 1971.

Dupré was trained chiefly by Charles-Marie Widor and Alexandre Guilmant at the organ. Both of these towering figures consciously invested the young Dupré with the perpetuation of the French symphonic school of organ playing and organ building. It is clear that in their optic, Dupré represented the future of their art and possessed the musical gifts, discipline, and authority to carry their principles to future generations. Indeed, investing a single person as a titular head of a school or movement is a characteristic French trait, and in music, especially in previous generations, such a head is clearly visible in most branches of music represented at the Paris conservatory.

Marcel Dupré willingly accepted this responsibility and authority, and was ultimately appointed to the two posts most emblematic of leadership in the French organ world: the professoriate of the conservatory organ class (1926) and in 1934, the tribune at Saint-Sulpice.

Following the first war (1914-1918), new musical currents blossomed, and in the Paris organ culture, several individuals founded the well-known “Les Amis de l’Orgue” in 1926-27, intended to promote new artistic trends in the French organ world through concerts, publications, and formulation of a neo-classical concept to be applied to new and historic organs alike. On the surface, such a movement appeared innocent enough, and perhaps even necessary, but Dupré understood the new society as antithetical to everything affiliated with the symphonic style of performance, repertory, and organbuilding. Although Dupré had cultivated warm, collegial ties with at least one of the pivotal forces in back of “Les Amis”, animosity reared its ugly head by the end of the 1930s. It was an all-out war between the symphonists led by Marcel Dupré and the neo-classicists with André Marchal, Norbert Dufourcq, and Victor Gonzales at the helm. Most French organists chose sides as the years passed, leading to bitterness and accusations on all sides of the debacle. Dupré confided to his inner circle that he was perpetually under attack by those who would destroy him along with the symphonic esthetic.

Exaggeration? Neuroticism? Certainly not. The suspicions of Dupré were fully justified. It now appears as if the tragic rupture separating Marcel Dupré from the genius who was Jeanne Demessieux was nothing short of a dispicable conspiracy engineered to capitalize on Dupré’s blind hatred of his adversaries to convince him that Jeanne Demessieux was disloyal. The trap was sprung during Dupré’s 1946 tour of North America1 , and the results were probably more spectacular than the conspirators could have ever imagined: Dupré separated brutally and irrevocably from Jeanne Demessieux, she who was intended to succeed Dupré and carry the torch to new generations. The neo-classical proponents were all too aware that only a genius of Dupré’s stature would guarantee the symphonic esthetic’s viability in future generations.

Some of Dupré’s reactions to his students and colleagues must have been strongly colored by the antipathy Dupré felt towards his tormentors. Rarely in the course of history does hatred ever produce positive results, but Marcel Dupré was hardly the first person ever to experience the derision and ridicule of detractors. His reactions to students and colleagues who involved themselves in the battles between the two camps could be hostile. Marcel Dupré interpreted their actions as disloyal, therefore unworthy of his support. Given the political power he held, it must have been all too tempting to use that authority to discredit a talent and impede a career. How else can one explain Jeanne Demessieux’s very late appointment to the Madeleine in 1962, held back in a small parish despite her overwhelming prowess as perhaps the greatest organist in many generations? Demessieux is not an isolated example.

But there were other facets to Marcel Dupré’s complex character. To his loyal supporters, his family, his friends, he was affectionate and encouraging. One has only to view the video released several years ago by the AAAMD of Paris2 in which Dupré the genius improviser talks about teaching improvisation to young organists, and that such teaching is all about encouraging fledgling attempts at the difficult art, never deriding or discouraging sincere efforts. In a recently-released interview3 with Marie-Louise Girod posted on YouTube, Mme Girod relates how very paternal and protective Dupré could be with his students, wanting desperately to protect them from the intrigues of the leading neo-classical organists who tried to deny conservatory first prizes to otherwise deserving students. In the case of her dear friend Jehan Alain, Mme Girod relates that he was frequently absent from class and, as a result, in danger of being dismissed by the administation. Marcel Dupré defended him on more than one occasion, invariably seeing to it that Jehan was never expelled.

Fifty years after his passing, it is long overdue to place Marcel Dupré in his historical context. The rumors, innuendos, and slander continue to circulate. If some of the accounts may well have been accurate, understanding the very bitter politics of the French organ world during the period 1930-1970 at the very least tends to explain some of his reactions.

Maurice and Marie-Madeleine Duruflé navigated these treacherous waters with aplomb. Maurice Duruflé may have espoused much of the credo of the neo-classical clan, but he had a deep and abiding respect for the genius of Marcel Dupré. Maurice Duruflé was often in touch with the leaders of the neo-classical faction and professed an abiding respect for the artist who was André Marchal4 , yet it was Marcel Dupré who played his wedding at St-Etienne-du-Mont in 1953. Marie-Madeleine Duruflé was personally involved with the family, especially after the death of Marguerite Dupré, Marcel’s very gifted daughter, and granddaughter Alice Szebrat-Dupré remembers Marie-Madeleine with great affection. It was possible to respect both worlds. Maurice and Marie-Madeleine gave us the supreme example.

1 Aided and abetted by a very close member of Dupré’s own entourage who had everything to gain by having
Jeanne Demessieux exiled. The stuff of a very convincing opera libretto!
2 Emissions télévisées : Marcel Dupré à Saint-Sulpice et à Meudon (1955 à 1969). Association des Amis de l’Art deMarcel Dupré, 2008.
3 https://www.youtube.com/watch?v=-aKNXWPhsmg
4 A charming anecdote related by Marie-Madeleine Duruflé to the author in 1992: The Duruflés adored cats but
did not keep one in their apartment. Maurice would occasionally call André Marchal who in turn gathered his cat,
coaxed it to purr, and held the telephone next to the cat’s throat so Maurice would get his “fix.”

Eschbach is a graduate of Indiana University and the University of Michigan, with a Prix d’Excellence and a Prix de Virtuosité from the Conservatory of Rueil. One of the last students of Marie-Madeleine Duruflé-Chevalier, he studied the complete organ works of her husband, Maurice Duruflé, and much of the French symphonic repertoire. He maintained an active concert career until the late 1990s when focal dystonia crippled his right hand. Eschbach is Professor of Organ at the University of North Texas where he maintains one of the larger programs in the southern United States. 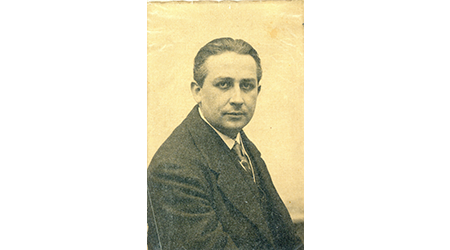 In 1920, Marcel Dupré was 34 years old. He had been, by this time, assistant to Charles-Marie Widor at the... read more 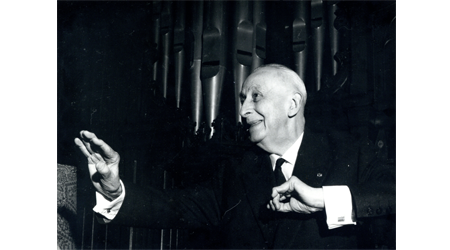 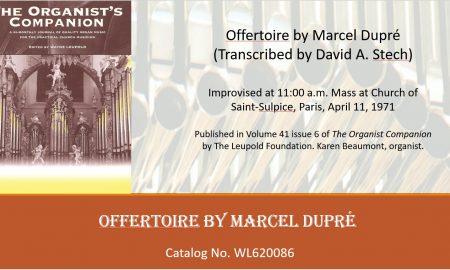 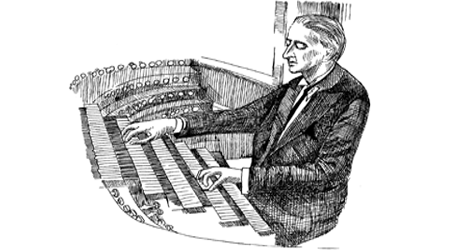 Marcel Jean Jules Dupré, one of the world’s most renowned twentieth century organists was born May 3, 1886 in Rouen,... read more 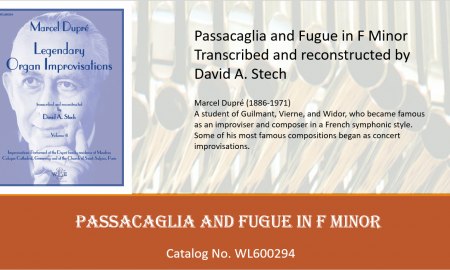 Passacaglia and Fugue in F Minor by Marcel Dupré 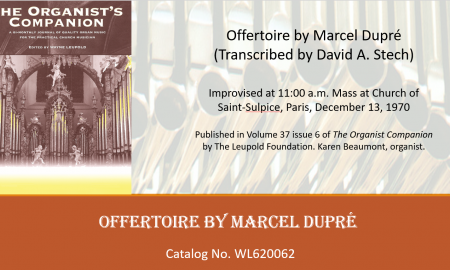 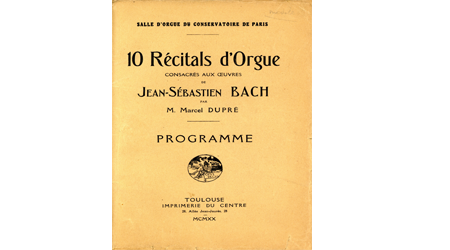 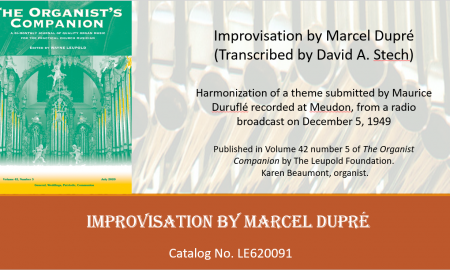