This month as we launch our new website we also introduce our new Hymn of the Month series in which one or more hymns drawn from collections published by Leupold Editions will be posted in the blog section of the website for consideration by pastors and musicians who may wish to introduce the hymn to their congregations the following month. The Hymn of the Month may be particularly appropriate for a given Sunday during the month, but often will also be thematically relevant for every Sunday during the month or season. Thus pastors and/or musicians may wish to have the choir introduce the hymn on the first Sunday of the month or season and then invite the congregation to join with the choir in singing the hymn on each of the remaining Sundays.

The Hymn of the Month for July 2021, with a nod to Independence Day, thematically focuses on the pursuit of peace and justice and combines a text by John Core (1951-2017) with a tune by Iteke Prins (b. 1937). Core was born at Camp (now Fort) Ruck, Alabama, and earned a B.A. in Speech Communication from West Virginia University in Morgantown, where he served as a Library Associate cataloging music from 1975 until his death in 2017. A fairly prolific hymn writer, Core was a member of the Hymn Society in the United States and Canada and published four collections of texts with Wayne Leupold Editions. Prins was born in Katwijk Aan Zee, Holland, and immigrated with her family to the United States in 1949. After achieving her career goal as a registered nurse, Prins later served as organist and music director for Blooming Grove Reformed Church in Rensselaer, New York, from 1969 until 2005. Also a member of the Hymn Society, Prins has published three volumes of hymn tunes with Wayne Leupold Editions. 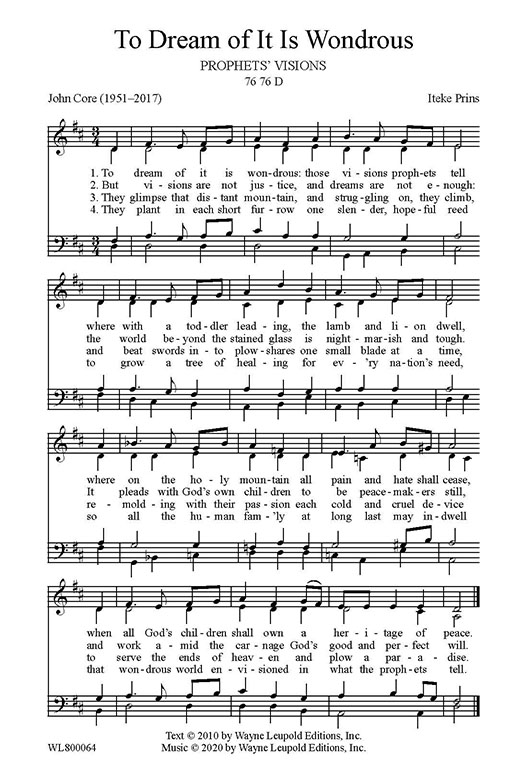 Mark Alan Filbert is Cantor (Organist/Choir Director) for Saint Paul Lutheran Church in downtown Denver, Colorado, a position he has held since 2002. Currently pursuing a doctoral degree in sacred music (DSM) through the Graduate Theological Foundation, Mark holds bachelor’s degrees in sacred music (BM) and music education (BME) from Oral Roberts University and master’s degrees in sacred music (MSM) and choral conducting (MM) from Southern Methodist University. He completed further study in the United States at Northwestern University, Westminster Choir College, Hamline University, the University of South Carolina, and DePaul University, from which he received the Level III Orff-Schulwerk Teaching Certificate, and in Europe at the Netherlands Carillon School, the Haarlem International Organ Academy, also in the Netherlands, and the Centro Pro Unione in Rome. Mark’s scholarly articles and reviews have been published in Reformed Liturgy and Music, The American Organist, and The Hymn. An avid collector of hymnals, he is a Life Member of The Hymn Society in the United States and Canada and has been a featured performer and/or workshop presenter at four national conferences. He is also an active member of the American Guild of Organists, having recently served as Worship Chair for the 2019 Denver Regional Convention, and as Sub-Dean, Dean, and Grant Writer for the Denver Rocky Mountain Chapter. He resides in Aurora, Colorado, with his husband of 29 years, Thomas C. Strickland, and their two cats, Libby and Brubeck.

God of Wisdom and Compassion

This month we continue our new Hymn of the Month series in which one or more hymns drawn from collections... read more

As Sunrise Greets the Morning

This month we continue our new Hymn of the Month series in which one or more hymns drawn from... read more

As Sunrise Greets the Morning

God of Wisdom and Compassion